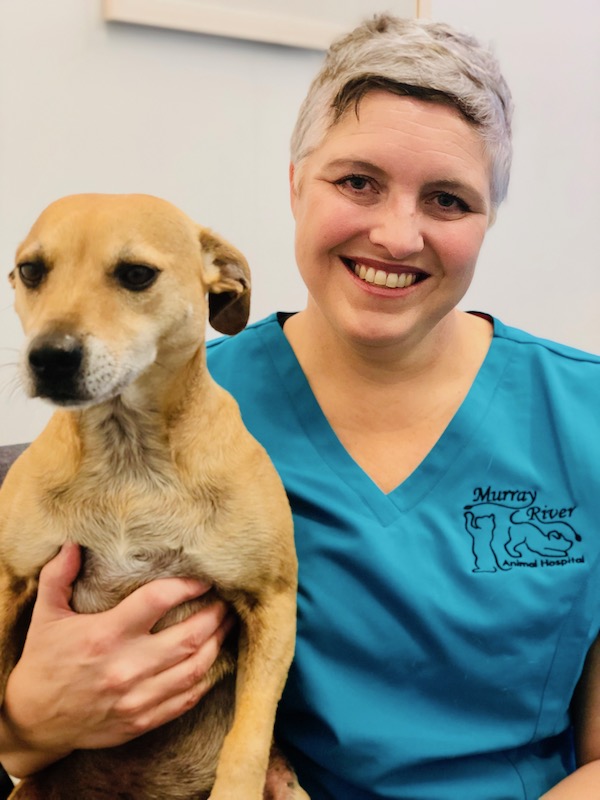 Introducing: Dr. Leanne Bailey BSc(Hons,) BSVc(Hons) and Murray River Animal Hospital’s Principal Veterinarian Director Leanne has always had a strong affinity for animals and is comforted by being surrounded by animals, especially her dog Rosie and cat Rocky. She also loves solving puzzles, and interacting with people.

Leanne started her career as a research scientist in the Department of Genetics, at The University of Melbourne. She found her work as a scientist interesting, but, ultimately unfulfilling and decided to embark on a career as a Veterinarian.

While studying her Veterinary Science degree, Leanne worked for The Lost Dogs Home as the Animal Ambulance driver, which honed her animal handling skills, particularly when dealing with fearful and aggressive animals. Her experience at The Lost Dogs Home also improved her ability to communicate with clients in the face of overwhelming stress. During this period, Leanne realised the extent of the stray and unwanted animal problem and became an advocate for avoiding unplanned breeding.

Leanne achieved First Class Honours in her Veterinary Science degree, which she completed in 1998 and soon travelled with her husband Micheal to San Diego, California so he could continue his scientific research. In order to work as a veterinarian in San Diego, Leanne had to pass three sets of rigorous examinations including the notoriously difficult California State Board Examination.

While living in San Diego Leanne and Michael had their first child in 2004 and decided to return to Melbourne to be closer to family. Leanne commenced locum work on weekends soon afterwards and when she felt it appropriate to return to weekday duties, one of the clinics offered her permanent part time work. Leanne and Michael had their second child in 2008 and she has happily juggled the roles of working and parenting ever since. Now that her children are older and are a little more self-sufficient, she is ready for a new challenge. The clinic and working environment within Murray River Animal Hospital is something she has long dreamed of, which is now a reality.