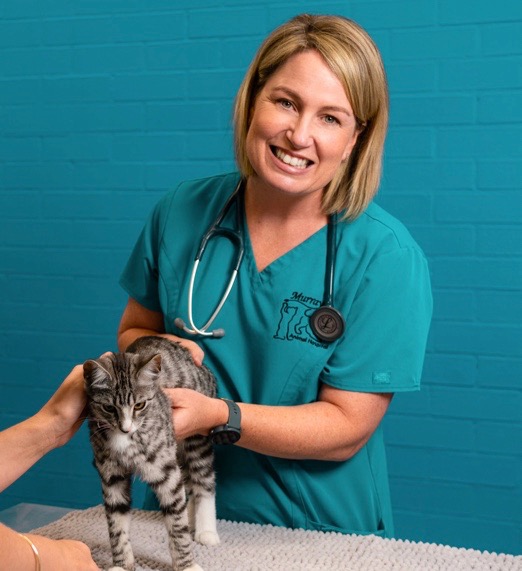 Jacqui grew up on a cattle property in the Goulburn Valley. And from a very young age enjoyed being around animals especially showing her families stud beef cattle. Jacqui always had the strong desire to study Veterinary Science, however after school she started an Agricultural Economics degree at the University of Sydney, but knew that this wasn’t the path for her and returned to the University of Melbourne to complete her Veterinary Science degree in 2005.

Together Jacqui and Justin have 5 children, and in the children’s younger years Jacqui worked lecturing Diploma of Veterinary Nursing students and during this time also completed post graduate degree in Vocational Education and Training at Charles Sturt University.

Now that all her children are at school and more independent, Jacqui was more than ready to return to Veterinary practice. Jacqui’s interest in marketing and business management within the veterinary field quickly lead to her current position as Practice Manager at MRAH. Becoming a business co-owner in 2020, much of her efforts are now directed towards administration and associated behind-the-scene duties.

Besides her Vet life Jacqui enjoys keeping active with her family, during winter you’ll find them skiing the slopes Mt Hotham & in the summer water skiing in the beautiful lakes and rivers in the region. Jacqui is an avid runner and 2019 she ran 2 half marathons & she’s also a Level 1 qualified CrossFit trainer!